Practice and Perseverance: Keys to Success in the Steno World

How do I Gain Writing Speed and Accuracy? 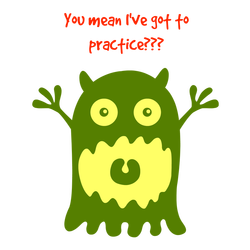 Practice. It’s the last thing a court reporting student wants to hear. After you graduate, it’s a dirty word, too. I’m a working reporter, I’m on that machine all day. Why should I practice?

Court reporting is the only profession I know of that improvement is made in tiny leaps and bounds. Students take tests, tests, and more tests, just to fail, fail, and fail again.

Then, out of nowhere, your speed picks up and your accuracy improves. Bam! You’ve passed your tests. You cruise along for a while till you hit a wall and it’s fail, fail, fail all over again.


There’s a saying out there that says the definition of insanity is doing the same thing over and over again and expecting a different result. Well, you must have to be nuts to be a court reporter or captioner because that’s the only way we become better at our profession.

Nearly two years ago I began transitioning from the court reporting world to the captioning world. The first time I wrote the news, if I got every other word, I was doing good. I cried, thought I’d never be able to do this, and nearly gave up.

But I sucked it up and began to change my writing. As I wrote in an earlier post, my theory was stroke intensive. I began small, like whittling down my contractions from two strokes to one. I also realtimed every job so I could see what I was doing wrong and how I could fix it.

I didn’t try to practice a news show again until August 2013. It was better, but still awful. I could hardly get through a show. Not necessarily because I was so bad, but because nearly everything came up as an untraslate. After all, how often does jargon associated with subjects such as ebola, politics, and terrorism come up in your daily depos?  I mean, it’s not like just anybody is going to have words like Al Qaeda and Abu Bakr al-Baghdadi in their daily dictionary.

I decided it was better to just add to my dictionary instead of working towards speed. It probably took me a good two or three months of daily news practice to add enough words to my dictionary to where everything would translate. Even with all of that prep, I might as well been a turtle because that’s how slow I felt.

Then something amazing happened. I started improving enough to where I could actually see a difference. Practice oddly became something I was addicted to because my screen actually had English words. And they made sense!  I looked forward to coming home after work and unpacking my machine. Heck, it even annoyed me that I didn’t have the time to practice in the weeks before my wedding.

In early September, I thought I had gotten to the point where I might actually be able to pass a simulation and I tried out with VITAC. I was pumped! I was excited!

Luckily, Amy’s been where I am now. Nerves can get the best of us when it comes to that steno machine. Amy Bowlen gave me some pointers and told me to try again in a month or so.

So I tried out again today and….I made it! That’s right, you’re looking at the very next VITAC captioner here. Practice is not fun or glamorous, but  combined with perseverance, it gets you where you want to go.

If you’re a reporter and you’re wanting to caption or get that RPR, CRR, CBC, CCP or RMR, or just reduce your editing time so you can have more time for fun, big surprise, practice and perseverance is what it will take to reach your goal.

So I did the same thing over and over again for two years. Some may call it insanity, but I call it progress. I know it works. I went from feeling totally incompetent during “60 Minutes” two years ago to where I am now. It couldn’t have happened without practice and perseverance. Motivational Without Practice there is no Glory 4 Inch Round Button Motivational Without Practice there is no Glory Throw Pillow Motivational Without Practice there is no Glory Nite Lites