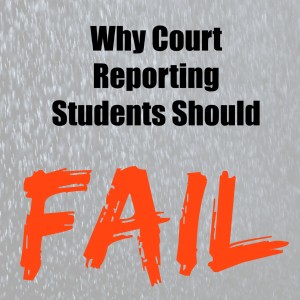 Don’t quit reading, just go with me on this.

You as a court reporting student receive nothing but encouragement from your teachers, friends and family, and from those of us who are out in the professional steno world. You’re constantly told you can do this, you can learn theory. You can pass your speed tests. You can write at 225, and even faster.

But when that doesn’t happen, especially when you’ve been in school for years, you start to think that just maybe this isn’t the career for you. You think everything should have clicked by now. Words of praise and encouragement start to have no meaning when you see absolutely no progress at all in your steno journey.

You begin feeling like just one big, fat failure. And you know what? That’s a good thing.

You don’t become a success instantly. Trust me, if there was magic fairy that could slap you up side the head to make you write like a fiend, I’d be the first in line to get whacked.

I believe by failing, you learn some valuable lessons that will serve you well once you do pass your tests and ultimately spread your wings in the professional world.

1. You learn that you should keep writing, no matter how much junk is coming out of your fingers. You don’t have to be in speed very long to realize when you’re all thumbs. Blame it on a bad night’s sleep, a fight with your significant other, or your classmate is breathing too hard all you want, but the fact of the matter is there are just times when your writing is just going to suck in general. Hate to break it to you, but there’s no guarantee you’ll be firing on all cylinders once you graduate either. Some days you’re just going to be off.

But even if you’re sitting there during dictation just knowing you’re writing everything wrong, keep going. Chances are, when you go back and read your notes, you did a whole lot better than you thought you would. I can’t count how many times I’ve sat through depos and hearings hating the fact I was going to have to come back and fix and bunch of junk that evening, only to realize later I did pretty darn good. Don’t ask me how it happens, it just does. So just keep writing!

2. Failing test after test gives you a golden opportunity to evaluate your writing. There’s a lot of reasons you failed that test. Maybe it’s because you’re not fast enough yet, or maybe your fingers aren’t hitting the correct keys accurately. Read your notes after each dictation, after each test, and after every practice session.

Eventually you’ll notice patterns. Dragging extra letters in your outline? Practice that outline over and over until that finger stays where it’s supposed to. Write words with similar beginnings or endings during practice until you can write cleanly.

Sometimes your brain just checks out and your fingers insist on hitting a particular outline. Every. Single. Time. Well, why not just follow your brain and make it a brief?!

For some reason, every time I heard the phrase “human being” I kept wanting to write HAOEPBG. Try as I might, that’s where my fingers wanted to go, so that’s what I defined it as. Maybe our brains aren’t checking out, maybe our brains are just trying to tell us there’s an easier way to write things!

3. You learn to tune out the negative. When you get a bunch of steno writers in one room, it only takes like, two seconds for the complaints to start flying.

“Did you hear that dictation? There’s no way that was the right speed!”

“The teacher has a funky accent, no wonder we can’t pass tests!”

“There’s too much noise out in the hall. I can’t hear/concentrate!”

A book could be written just of CR student’s complaints. I know, because I said a few of them 🙂

“I don’t like Attorney so-and-so. He talks way too fast.”

“My firm owner always gives the good jobs to everybody else.”

Whether you’re a student or a working reporter, nothing will hold you back more than negativity. It will make you doubt yourself, and convince you that you’ll never reach your goals.

Thomas Edison once said, “I have not failed. I’ve just found 10,000 ways that won’t work.”  Failing isn’t fun, and it’s not the end of the world. It’s just the vehicle that drives you to success.