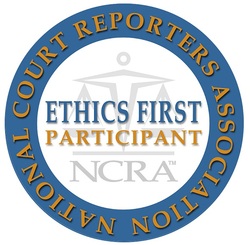 Well, I’ve been plugging away at my captioning training. I’ve done better than I ever thought I would. I even have an estimated on air date at the end of February. Yay me! I’m not sure whether to be excited or freaked out. Right now I’m excited. Talk to me around Valentine’s Day and I’m sure I’ll be freaking out.

But even though I’ve turned in my reporter hat for a captioning one doesn’t mean I’ve abandoned the reporter side of the profession. I still remember what it was like to be confronted with situations that you weren’t really sure how to deal with.

We all know that court reporters have to be impartial, no taking sides and playing favorites. But after reporting for a while in one city, attorneys can become friends and sometimes the professional ethics line can get blurry.

Heck, not that I’m saying that any of us would willingly do something shady, but that fact is attorneys can and do ask for things that seem innocent, but we as Keepers of the Record can’t ethically do. These are some situations I’ve been involved in more than once in my reporting career, and I’m sure others have or will be faced with the same dilemma.

Hey, can you check the transcript? I think so-and-so didn’t/did say…

This happens quite regularly. And I’m only human, I can mishear something or write something wrong. If you as an attorney are unsure, then do let us know. But a few times I had attorneys tell me, “are you SURE that was said? I have something else written in my notes and I know I’m right, can you change it to what was really said?”

Yep, that really happened. I was professional about it and told him I’d check the audio. I played that thing as slow as was humanly possible and asked a couple of friends to listen to it to make sure I didn’t hear something wrong. In the end, I had to call the attorney and tell him that the transcript was correct as it was and I wouldn’t be making any changes to it. Of course he got ticked off, but, hey, life goes on.

You’ve worked around an attorney for years, so of course you talk about the kids and life in general…

I worked in a smaller city, so naturally throughout the course of 11 years I came to know most of the attorneys quite well. We’d swap stories about kids, pets, and past cases we’d worked on together.

Nothing wrong with that, right?

Not really. It’s nice to be nice. Where a problem can arise is if the opposing counsel is an out-of-town attorney that you don’t know. Chatting up Attorney 1 in front of Attorney 2 can make Attorney 2 think you’re not very impartial. The best practice is to save personal talks for when you’re only with attorneys that are well known. If you’re dealing with an attorney you’re not very familiar with, keep the small talk general and involve both sides in the conversation.

I really appreciate you doing my deposition today, can I buy you lunch?

It’s nice to actually be appreciated, especially in our job, isn’t it? Once in a while attorneys would offer to buy me lunch. It’s not unethical in and of itself, but caution needs to be taken to make sure you’re not seen as being impartial.

If the attorney is buying lunch for everyone at the deposition (yes, it can happen) then it’s fine to accept lunch. Otherwise, it’s best to be thankful, but buy your own lunch. Again, if Attorney 2 found out Attorney 1 bought you lunch, even if it was innocent, it could look unethical in Attorney 2’s eyes.

As a rule, if I bumped into attorneys at lunch, I’d buy my own lunch and sit at a separate table. Unless, of course, both attorneys were eating together and invited me to have lunch with them. (which I didn’t accept often anyway. I’d heard them talk for three hours, the last thing I wanted to do was hear them on my off time:)

I need this depo by tomorrow, don’t tell the opposing side until later.

I was actually asked to do this more than once. I know that Attorney 1 was trying to strategize against Attorney 2, but for me as a reporter, it’s a big no-no. When one attorney orders a transcript, ALWAYS call all attorneys involved and ask if they’d like a copy, even if they’re backorders.

Don’t get drawn into the drama that attorneys create for themselves.

This can get tricky. In fact, I kind of fell into this situation by accident. It was a highly contentious case, the attorneys hated each other, and I happened to know only the plaintiff’s attorneys.

The attorneys wanted to place some things on the record. One was in person, the other was on the phone. I was taking everything down, and things got very heated. For some reason, the attorney on the phone decided he hadn’t known he was being recorded by a reporter and a lot of drama ensued.

There were things said in the room that came down to a he said/he said situation. In the end, I was asked by the attorney I knew to write an affidavit stating what had happened that day so he could file it with the Court. I did it, and what I said was the truth about what went on that day, but it opened up a can of worms. Looking back, I should have just said I’d rather not.

Lesson learned? Never involve yourself in any case, no matter how small and innocent it may seem. If asked by an attorney to give your side of things, just say no. Just say no.

Become a Member of the NCRA Ethics First Program

After that nightmare, I was browsing NCRA, just being nosy, really. I stumbled on their program called Ethics First. NCRA’s primary objective with this program is to

“seek to positively educate court reporters, firms, and clients that the impartiality and neutrality of the court reporter is of utmost importance in maintaining an unbiased legal system.”

It’s mainly aimed at gift-giving, something that apparently was a problem before I became a reporter. Well, let me just say, I never participated in gift giving, nor did any of my colleagues to my knowledge.  But it also addresses the sometimes gray areas that sometimes happen when you’re not so sure what’s the right thing to do.

Individuals, firms, videographers, basically anyone who is responsible for making a record can be a member of Ethics First. By being a part of the task force, you’ll be able to show the legal community that you are dedicated to adhering to a code of ethics and best practices. As a member, you’ll get a sticker and permission to use icons and graphics to display on your professional website or blog. To find more information and to sign up, visit the Ethics First page on the NCRA website.

And just to lighten things up a bit, I found this video that pokes fun at court reporters and the favors that attorneys used to expect back in the day. Or so I’ve been told. Muammar Gaddafi was associated with a lot of controversy during his lifetime, but he probably never would have guessed that he’d be associated with corrupt court reporters.