How and Why I Chose to Become a Court Reporter 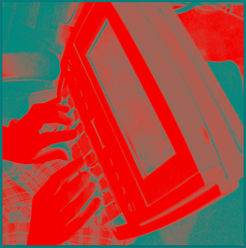 In honor of Court Reporting and Captioning Week, I’d like to share with you how my journey into the world of steno began. It’s been a weird journey, but I wouldn’t trade it for a thing.

I was a senior in high school, way back in the dark ages. (1994)  I’d never been exposed to court reporting, but for some reason that’s the career that appealed to me.  I didn’t know a court reporter. I don’t even remember seeing one on television, but I knew I wanted to be the person that sat in the courtroom tapping away quietly up front. The problem was, I went to a small private school, and none of the administrators knew how to help me get on the right track. In the days before the internet, I couldn’t really research it for myself either.

I had my son the September after I graduated, and my court reporting dream was put on hold. I went to a community college and got a two year degree. I worked two jobs after I graduated. They made money, but I wasn’t happy. Fast forward to age 25, and I was jobless and in a rut. I needed a change.

I happened to be looking through the want ads in the newspaper and I saw a court reporting school ad. I was excited and intrigued. I called that day to set up an appointment to check it out. I went, loved it, and was ready to sign up. It was a dream I’d had since I was in high school, and now it appealed to me because I would able to work my schedule around my son. I was excited! I was ready to sign up!

But then I got cold feet.

At the ripe old age of 25, I thought I was too old to go back to school. I mean, if all things went on schedule, I’d be 27 by the time I graduated. I’d be almost 30! I’ll be honest, I nearly didn’t enroll for that reason alone. In the end, I said the heck with it and enrolled. In less than two years, I was a full-fledged court reporter.

I’m so glad I didn’t stop myself from going after what I’d wanted since I was a teenager. I was able to have 11 interesting and awesome years as a court reporter. I met a lot of interesting people I’d never have met otherwise. I even met a celebrity once. Well, a minor one anyway, Jay North of “Dennis the Menace” fame. I was someplace different nearly every day, something I’d never had been able to do in most other careers.

Those 11 years have now brought me to a new phase in my career: captioning. The dream of being a captioner was actually planted when I was in court reporting school when a captioner came and spoke to the school. The two reasons I didn’t pursue it then was because my son was small and I needed a job right then, and I didn’t think I’d ever be good enough to actually be a captioner.

So that’s why and how I became a court reporter. If this is a career you’re considering, take a lesson from me: If it’s something you really want to do, don’t let petty excuses keep you from embarking on one of the most unique careers available today.

If you’re already a court reporter or captioner, please leave your story in the comments below!